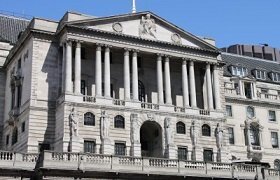 In the run up to the BOE meeting a lot of commentators focused on the report that the rate of inflation rose to 2.9% in August. The report fuelled a rally in sterling as investors worried that persistent inflation could force the Bank of England to adopt a more hawkish tone and potentially tighten policy earlier than previously expected.

Unfortunately, the recent rise in inflation has occurred in the context of weakening UK economic fundamentals. The UK’s economic performance has lagged that of G7 peers in recent quarters and the outlook is clouded by uncertainties surrounding the outcome of the Brexit negotiations.

Monetary tightening can often serve as a positive signal if it is a response to strong economic growth. However, rate hikes by the BOE at this point would be counterproductive as it could undermine economic activity at a time when both consumer and business confidence are already flagging.

The Bank of England’s decision to leave rates unchanged is consistent with the evidence on the performance of the UK economy. We have had bouts of higher inflation before without the need for rate hikes. The decision boils down whether or not the BOE expects the underlying drivers of inflation to persist. The balance of evidence at this point suggests that inflation is now close to its peak and should be on a downward trend by the end of this year.