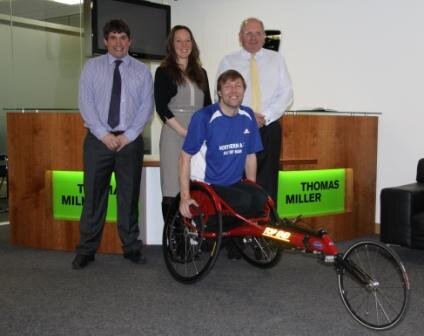 The Directors and the staff of Thomas Miller (Isle of Man) Limited recently had the pleasure of meeting wheelchair athlete Darren Kennish in order to officially present him with the lightweight racing wheelchair they had purchased for him in response to a fund raising appeal by Northern Athletics Club.

Fund raising activities were initially instigated by the Club to help Darren achieve his ambition of competing in the 2014 London Marathon. However, a number of the staff at Thomas Miller had met or knew of Darren through their involvement with the Club and were very keen to help. A proposal was put to the company’s charity committee to fund the entire cost of the wheelchair and Darren’s dream is now a reality, as not only has he got his machine but excitingly has also recently been given a late entry into the years Marathon which is being staged next weekend.

Since contracting a debilitating virus which caused complete paralysis of one of his legs, Darren has shown exceptional promise in wheelchair athletics and becomes the first Manxman to compete in the London Marathon’s wheelchair event.  He has been a regular participant in the Ramsey Bakery Fireman’s Run and also courageously entered the Northern AC and Isle of Man Athletics Championships, despite having to compete in a standard issue hospital wheelchair. Given the circumstances some of his times last year were quite remarkable but he is already seeing an incredible improvement since the introduction of his new custom fitted machine and knocked more than 50% off his best time for the Up & Running Ramsey Park Run last Friday.

Northern AC spokesperson, Tom Melvin, said: “Darren is all about what he can do not what he can’t do.  Through this type of approach he is able to achieve so much and I believe what we are seeing from him at present is only the start.  His attitude and dedication are an inspiration to all members of Northern AC and the opportunity that Thomas Miller have given him is life changing.  It is an honour for me to be able to assist and coach Darren.  When Darren crosses the line at the end of the London Marathon there will be tears of joy shed by his club mates at Northern AC.”

With the arrival of his wheelchair coming much sooner than planned, Darren has been able to enter himself into the Great North Run and hopes to enter more as the year progresses.

Speaking of the support he has received, Darren said “I cannot thank the staff of Thomas Miller enough.  The arrival of the wheelchair has given me the incentive to push on and go further than i could have imagined. Thanks to the training and the continued support from Northern AC, I am really looking forward to taking part in the 2013 London Marathon.”

Ian Jarrett, Chairman of Thomas Miller (Isle of Man) Limited said, “We are absolutely delighted to be able to help Darren to achieve his ambition and all the staff at Thomas Miller wish Darren all the very best of luck for the Marathon next weekend.  We were all really impressed with Darren’s enthusiasm and commitment and we will be watching with great interest to see how he progresses not only in the London Marathon but also in the Great North Run and any other events he enters throughout the summer.”