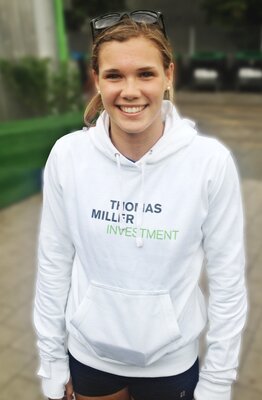 Thomas Miller Investment Sponsored Diver, Grace Reid, narrowly misses out on a medal at the Commonwealth Games but pulls out a Personal Best to finish 5th in the 1m Springboard Final.

Grace entered the final dive of the 1m Springboard in 2nd place, but having opted for a safer ‘go-to’ dive (in a schedule which is produced in advance of the event and strictly adhered to) she slipped down off the podium as her 11 rivals all went for something a little more difficult.

Speaking after the event and her choice of dives, Grace Said:

“It’s a dive I had been doing for a while – when I feel a little bit nervous I relax into that dive. I came in for a PB and I got a blooming good one. I’m very pleased.”

I the 3m Springboard Final Grace finished in 9th Place, 1 place ahead of Rebecca Gallantree who made the Olympic Semi-Finals for Team GB in 2012. Although not scoring as high as she did in Delhi 4 years ago, Grace beat the score that crowned her British 3m Springboard Diving Champion in 2012. A fantastic achievement!

Grace’s training has been severely hampered having suffered a bad shoulder injury earlier this year – only recently has she managed to pick her training up again.

Thomas Miller Investment have been supporting Grace for the last 5 years and have seen her compete in 2 Commonwealth Games, narrowly miss out on a place in Team GB at the London 2012 Olympic Games and be crowned European Junior Champion (Synchronised) and British Champion (Solo).