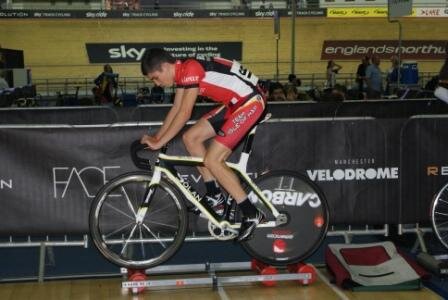 Thomas Miller Investment (Isle of Man) Limited is pleased to announce its continued support of Jake Kelly, 16, one of the Islands leading junior cyclists.

Jake, who was recently featured in ‘The Times’ Sport Special on Cycling in the Isle of Man, has been competing, by invitation, in the Revolution Cycling Series at the Manchester Velodrome for Team Rouleur.  The second event of the 2011 / 2012 series saw Mark Cavendish lead a star studded line up.  As part of the ‘Future Stars’ competition for 15 and 16 years olds, Jake was competing against some of Britain’s most promising new talent.  After 4 gruelling rounds, Jake finished in 8th place, an impressive finish given the lack of track practice he is able to undertake.

Riders such as Ben Swift and Peter Kennaugh moved into British Cycling’s Olympic Academy (from which they have now graduated into Team Sky) following success in the ‘Future Stars’ with numerous other riders now part of the Olympic Development Programme (ODP) for 16 to 18 year olds.  As a member of the Olympic Talent Team (for riders across the UK aged 14-16), Jake continues to fight for a place in the ODP.  He recently attended a four day training camp where he was training alongside members of the ODP and the Olympic Academy and has been invited to the next one in March.

TMI have agreed to support Jake’s progression.  Jake has to regularly travel off the Island to attend training camps and competitions in the UK and Europe and it is hoped that this will be aided by TMI’s support.  2012 in particular will see Jake attending a number of events in the Manchester Velodrome as practice for the National Track Championships in August.  The results of which may determine Jake’s place in the ODP.

Ian Jarrett, Chairman of Thomas Miller Investment (Isle of Man) Limited, commented, “The Isle of Man has some superb athletes all in need of a little extra support, but Jake really stood out for us.  Having only started racing competitively at the age of 13, he has demonstrated tremendous dedication and commitment to get to where he is today. We understand the cost and commitment involved in sport at this level, especially living on an island and we are only too pleased to be able to remove some of the burden.”

Simon Kelly, Jake’s father, said, “We are delighted by the level of support that Thomas Miller Investment has shown.  It is a true recognition of Jake’s talents and couldn’t have come at a better time.  Jake has a really busy schedule for the winter track season and the support has opened up opportunities to ride world class events that we would normally have been unable to attend.”