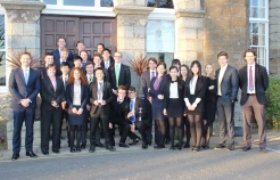 The second biennial King William’s College and Thomas Miller Investment Share Race came to a thrilling climax at the final presentation on 16th March. This extra-curricular project saw around 40 sixth form students divided into 10 teams and pitted against each other in a five month race. Each team traded a virtual £100,000 portfolio of FTSE 100 (Footsie) stocks and gave regular presentations covering their strategy, stock positions and portfolio performance.

The techniques employed by the students included the ‘blind monkey’ which picked equity stocks at random; investment selection according to in-depth analysis of each company’s fundamentals; and use of technical trading rules aiming to trend-follow or buy and sell on dips and peaks.

On the night, the prize for Best Portfolio Performance went to the Upper Sixth Men team, whose portfolio managed to gain 9.4% over the period compared to the Footsie’s 2.9%; and whom were the only team to have made a profit over the Race. The winning team members were Stanislav Kataev, Jayil Mambetaliev, Bradley Martin and Christopher Whiting.

The team achieved some good gains during the first few weeks of the competition, following which they took active steps to diversify their portfolio which largely protected its value through the market sell off from November onwards. The success of this strategy led to the Upper Sixth Men also being awarded the Best Investment Strategy prize.

The Best Presentations prize went to Team Eastern Europe. The judges were particularly impressed by the quality and depth of their powerpoint presentations and clarity of delivery in front of the group.

The Wooden Spoon prize for worst overall performance was awarded (perhaps unfortunately!) to the staff team. Whilst there was some last minute jostling for this position, their fundamental investment strategy, with heavy mining and resource stock exposure, led to a loss of  17.5% over the course of the Race.

Riaan Riekert, Head of the Economics Department at King William’s College, commented that “This Race experienced challenging investment markets and it was fascinating to see how the teams reacted to the unfolding sequence of economic and geopolitical events.”

Tom Richards, Managing Director of Thomas Miller Investment (Isle of Man) Limited, offered his congratulations to the Upper Sixth Men team and added that he “had again been highly impressed with the effort shown by all the Race’s students, showing enthusiasm and talent across the board.”