Jake Kelly Receives his Scholarship for a 2nd Year 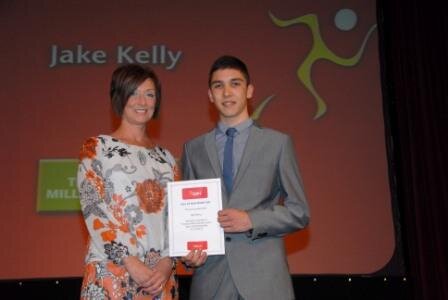 TMI selected Jake, now 17, as a recipient of their support in 2011 having worked alongside Isle of Man Sport Aid to find a suitable ambassador for the company. The support Jake received enabled him to upgrade his bike and increase his participation in events in both the UK and Europe, primarily the Revolution Series as part of the Rouleur Team as well as the gruelling 198km Kuurne-Brussels-Kuurne road race in Belgium in February.

Speaking of their support, Sue said “Jake’s progress and results over the past 12 months have been remarkable. A number of the events Jake has participated in were new to his schedule and he has performed superbly. Jake has also been invited by British Cycling on several occasions to training camps where he has trained alongside members of the Olympic Development Programme and the Academy team. We are only too pleased to be able to continue our support of Jake and wish him the best for the upcoming season and of course his future.”

It is Jake’s goal to be invited into the Olympic Development Programme (ODP) in 2012, having previously been a member of the Olympic Talent Team (for 14-16 year olds). The upcoming season will be the toughest yet if Jake is to reach this goal. A combination of tough training programmes, a busy race schedule and AS Levels will require a huge amount of dedication and focus – something which Jake has displayed in abundance.

In response, Jake said ”The support from Thomas Miller Investment will really help me progress this year. It will allow me to travel to more races across Great Britain and Belgium which is crucial if I am to be considered for the ODP. With the help of TMI I am really looking forward to the 2012 racing season and I am looking to get some top finishes in the Peter Buckley National series.”