Congratulations to Jake Kelly for a superb season. 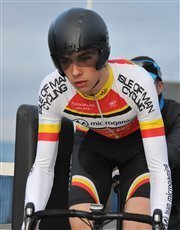 Thomas Miller Investment sponsored cyclist, Jake Kelly, has had a successful season, despite breaking his wrist half way through and continuing his training in a cast!

Jake was Team Microgaming-Isle of Man’s top finisher in the British National Junior Road Race Series (also still popularly known as the ‘Pete Buckley Series’).  He finished an impressive 20th in the overall standings, with 46 points, in his first year racing at junior level.

Jake narrowly missed out on a top-10 finish in the Junior Tour of Wales - a three day event which was the final event in the national series. The Junior Tour of Wales is the hardest and most prestigious British Junior race in the series, consisting of 5 stages of racing over just 3 days of the August Bank Holiday. Like most tours it starts with an individual time trial which is followed by 3 road race stages and a closed road circuit race at Bryn Bach Park. The race travels through the counties of Gwent, Dyfed, Powys and through the dramatic scenery of the Brecon Beacons.

Jakes best performance on the road was his bronze-medal finish in the British National Road Race Championship in May which took place over a 125km course near the Brecon Beacons in South Wales.

More recently Jake took part in the British National Track Championships at the National Cycling Centre in Manchester.  Jake competed in the Junior Mens Madison Championships, partnering up with his friend from Yorkshire, Jake Scott.  The 30km event took to the boards, with the two man teams gaining points throughout the race.  Second Year Juniors, Jon Dibben and Sam Lowe took victory and the national title ahead of Tao Geoghagen-Hart and Oliver Wood, with  First Year Juniors, Jake Kelly and Jacob Scott taking the Bronze Medal.

See Jake on the far right of the podium here

Jake will continue training with the British Olympic Development Squad, be invitation, at the end of the year.