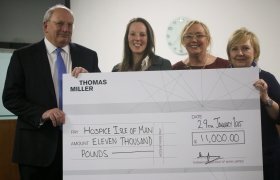 On the 22nd January 2015, Thomas Miller (Isle of Man) hosted a Burns Supper and Charity Auction in the Royal Hall at the Villa Marina in aid of Hospice Isle of Man.

With The Ellan Vannin Pipes & Drums band out in full force welcoming guests as they arrived and the tables in the main hall decorated with 18 different  tartans the scene was set for one of the largest Burns Suppers to be held on the Isle of Man in recent years.

Over 180 guests celebrated the life and work of ‘Rabbie Burns’ in an evening full of tradition and spectacular entertainment but there were also some not-so-traditional twists. Notably Chef David Mason’s “Haggis Bon Bon” – a delicious nouvelle cuisine version of haggis, neaps & tatties.

Some of the Directors of Thomas Miller and Thomas Miller Investment, along with local lass Kristene Sutcliffe, Speaker of the House of Keys The Hon Stephen Rodan and Sir Miles Walker participated in the proceedings but the highlight of the evening was undoubtedly Thomas Miller Investment’s CEO, Mike Balfour, who took to the stage and with great panache  gave 'The Address to the Haggis’.  Mike’s theatrical and fluent eight verse presentation was a sight to behold and provided a great intro to the festivities, especially for those attending a Burns Supper for the first time.

The ‘Toast to the Lassies’ was superbly delivered by Guest Speaker Ian Robertson, the BBC rugby commentator and former Scottish International.  Ian’s wit and wicked sense of humour along with his wealth of sporting anecdotes and one liners provided for an after dinner speech that was both enthralling and at times stomach-achingly funny.

Ian Jarrett, Chairman of Thomas Miller Isle of Man was delighted with the success of the evening,

‘I am truly grateful to those who supported the event and I never cease to be amazed by the generosity of the Manx business community who helped us to raise £11,000 for such a worthy cause. We understand that this will cover over a month’s nursing and medical care that patients receive in the In-patient Unit day and night.”