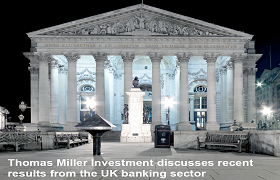 (Note the order – could there be an indication of quality there?)

Britain’s banks seem to be back from the brink.

Overall, recent 2017 results gave an encouraging picture. Full year underlying profits rose 11% at HSBC, 24% at Lloyds, 10% at Barclays, while RBS produced its first annual profit in… wait for it, ten years. Even RBS’s ‘statutory profits’, as opposed to ‘underlying profits’, were positive at £750m (‘underlying profits’ allow companies to ignore nasty ‘one off’ or exceptional items – things like misconduct charges and restructuring costs).

As one would expect, there were improved rewards for shareholders. Lloyds upped its dividend by 20%, and promised £1bn of share buybacks. Barclays reinstated its 2015 dividend at 6.5p per share, reversing the 50% cut it made in 2016, and suggested it too would look at buying back its own shares.

HSBC held its dividend, but there have been substantial increases in recent years and the shares already yield over 5%. The issuance of additional Tier 1 debt currently prevents it buying its own shares, but later this year it will likely do more of this.

RBS is still not paying a dividend (a mere ten years after cancelling the last one), but once it settles with the US Department of Justice over the alleged misselling of US mortgage backed securities it is likely to reinstate one.

The better picture fits with a UK economy that trundles along with some momentum – albeit at a 1.5% annual pace rather than the 2.5-3% pace of a few years ago. While things haven’t been brilliant, they have at least been OK.

HSBC, with its exposure to loan growth in Hong Kong and Asia, and higher US interest rates, is in a better place in this respect, underlined by its superior share price performance over the past two years.

While HSBC’s and Lloyds’ results were much as expected, positive surprises came from the other two, which in stock market parlance have been ‘dogs’ for some time.

The fact that RBS finally made a profit last year was a relief, though a big fine by the DOJ – some reports have suggested $10bn – could wipe out 2018 profits.

The biggest positive surprise was from Barclays. Its investment bank did much better than peers (even US peers) in Q4. All its main divisions are now profitable. It still has to weather issues (and possible fines) related to its 2008 refinancing, and retain its CEO (Jes Staley is under FCA investigation for past HR issues). But it could be past the worst (note that the conditional tense has become a prerequisite when discussing bank performance).

One of the common themes in the various CEOs’ statements was a commitment to technological investment. Lloyds is investing £3bn in systems over the next few years. RBS incurred a £2.5bn restructuring charge over the next two years, partly for digital investment.

The flipside of lower UK branch transactions, and a reduction in branch networks, is more ‘video bankers’, as RBS puts it.

RBS is now offering ‘digital mortgages’, with the agreement period cut from 23 days to 11 days. It has also invested in an ‘AI chatbot’ with the charming name of Cora. This ‘visual avatar’ is apparently available 24/7 with no ‘wait time’, and can field unlimited queries simultaneously. Over the past ten months, it has held ‘400,000 conversations responding to over 200 different questions.’ How about that for the old concept of ‘talking to your bank manager’?

More seriously, it illustrates how technological change is helping banks to reduce costs, and become less labour intensive – helping to offset the effects of low interest rates and sluggish loan growth… and fines.

Who knows, the machines may even give out better advice in future.

There were a few slip ups (Lloyds recording another £600m of PPI charges). But overall, the banks look to have got through a tough patch… perhaps their worst period in a hundred years (or maybe since the nineteenth century)?